The international horticultural exhibition Floriade Expo 2022 opened to the public yesterday at the site of the MVRDV Arboretum Master Plan in Almere. The concept includes an alphabetical library of trees and plants arranged in lots on a rigorous grid across the 60-hectare site. The master plan was conceived as a framework for the Expo, and at the same time, as a plan for a sustainable city district, given that the park will be transformed into a new residential area after the event. Held every ten years and running for six months, the Expo showcases the latest innovations in the field, from nature-friendly agriculture to a sustainable pilot house made from 93% recycled plastic. 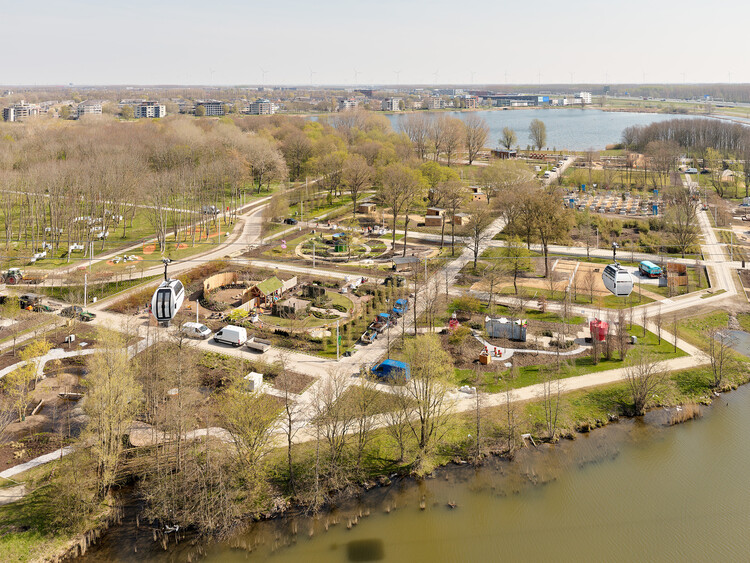 The concept of arboretum proposes a grid of small trees on which the species of plants and trees are classified in alphabetical order according to their Latin name. The project, developed with landscape architects Niek Roozen and Christiaan Pfeiffer, includes 40,000 shrubs, 200,000 perennials and 1 million bulbs. The masterplan is developed around the idea of ​​a “green dip”, that is to say “the immersion of buildings in as much greenery as possible”.

This arboretum gives the opportunity to see all the plants of the Dutch climate zone, while showing what they bring to the green city. This means adding oxygen, capturing carbon dioxide, cooling, climate adaptation and biodiversity. The arboretum also shows what the plants need in terms of soil, water and maintenance. I hope a good search and read function will be added to our living library of trees and plants so that all this information becomes visible. During the construction of the new district, a symbiosis can be established between the city and the landscape, and we can test the effect of vegetation on the building. The arboretum is therefore also an instrument for increasing knowledge. It is good that in the future, the arboretum will be managed, maintained and developed by an independent foundation, so that the Expo has a legacy. – Winy Maas, founding partner of MVRDV

MVRDV unveils its vision for a self-sufficient valley in Armenia

The site is bordered by a boulevard crossed by wide bridges, two of which are constructed from sustainable construction materials such as cementless concrete derived from Almere waste. In the center of the Floriade park stands the Flores Tower, whose colorful facade designed by MVRDV in collaboration with Arttenders and the Flemish artist Alex Verhaest presents a composition of all the species of trees, plants and flowers of the Expo. The Flores Tower is also the first permanent building in the new district.