When considering pruning lilacs, keep in mind that these shrubs flower best on newer wood, so you can do them a favor by removing some of the older canes. But “newer” is a relative term. Flowers generally do not appear on wood less than 3 years old, while 5-8 year old canes usually produce the most flowers.

Therefore, your lilac bush care routine does not need to include pruning a young shrub except for trimming spent flowers and removing dead or broken branches. However, once the lilac reaches about 6 feet in height, it might appreciate some rejuvenation pruning.

RELATED: How To: Plant A Bush Or Shrub

When to Prune Lilac Bushes for regular maintenance

If you’re wondering when to prune lilacs, the simple answer is that they should be pruned within 2 weeks of when they finish blooming in the spring. Cutting at any other time of the year would be a mistake, as summer is when lilac bushes begin to produce buds, which persist through winter for blooming the following spring.

However, if you prefer to prune when the plant is bare of foliage, you can do so in late winter, although doing so will suppress potential blooms. Whichever pruning option you choose, follow the steps below to learn how to prune a lilac bush. 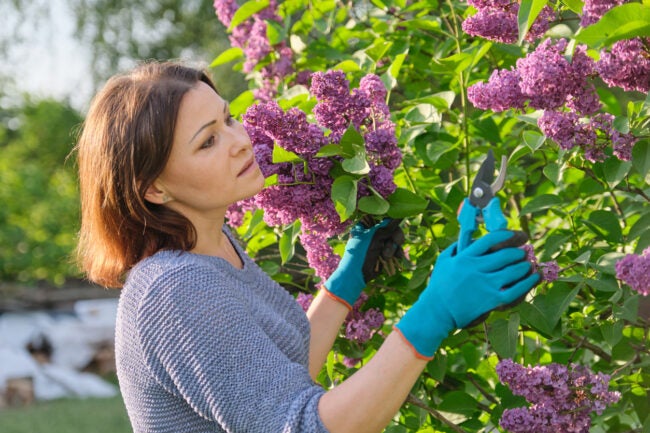 It helps to know that these steps include routine maintenance pruning (which is minimal for lilacs) and rejuvenation pruning. When applied to pruning lilac bushes, rejuvenation pruning may suggest a drastic cut of these shrubs in late winter – about 6 inches from the ground – to encourage any new growth. However, such extreme measures will eliminate all blooms for at least 1 or 2 years, since lilac buds begin to form soon after their last spring bloom ends.

When pruning lilac bushes for rejuvenation, most gardeners therefore prefer to remove a third of the oldest canes every year for 3 years. In this way, youthful vigor can be gradually restored without eliminating blooms.

Before pruning lilacs, soak the blades of your tools in a sterilizing solution, such as 70% rubbing alcohol or Lysol disinfectant, for 5 minutes to prevent the spread of disease. Then rinse the blades with water and let them dry before use. 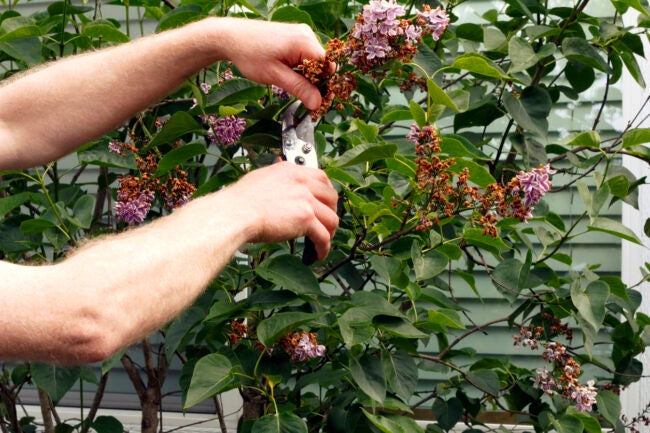 Begin pruning the lilac bushes, removing any shriveled flowers as they fade. To do this, find the first pair of leaves under a cluster of faded flowers and cut just above these leaves. You should be able to use a bypass pruner for this, unless the stems are over ¼ inch in diameter. In that case, try bypass pruners instead.

STEP 2: Remove dead, broken, grub-infested or rubbing canes at the base.

For the next phase of your lilac maintenance routine, remove any canes that appear damaged or infested with pests such as the lilac borer. (Small holes at the base of shoots, accompanied by sawdust, often indicate borers.) When two canes rub against each other, remove the weaker one to prevent it from damaging the stronger one.

STEP 3: To rejuvenate the bush, prune back 1/3 of its old canes. 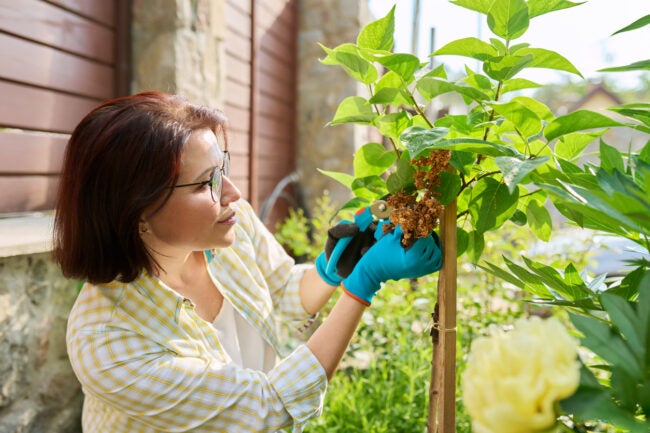 If your bush has aged enough to need a rejuvenation pruning, cut off a third of the oldest stems (the largest in diameter) by cutting them at the base. You will probably need bypass pruners instead of bypass pruners for this. For canes over an inch in diameter, use a pruning saw instead.

If your lilac is a grafted shrub, your lilac pruning procedure should include removing all suckers (new shoots growing from the base of the plant). Unless you’re growing a living fence, remove most of the suckers from a shrub growing on its own roots, leaving only enough suckers to replace the older canes you’ve trimmed.

RELATED: 12 Fall Landscaping Mistakes You Should Know and Avoid

STEP 5: Remove another 1/3 of the oldest canes every year for 3 years. 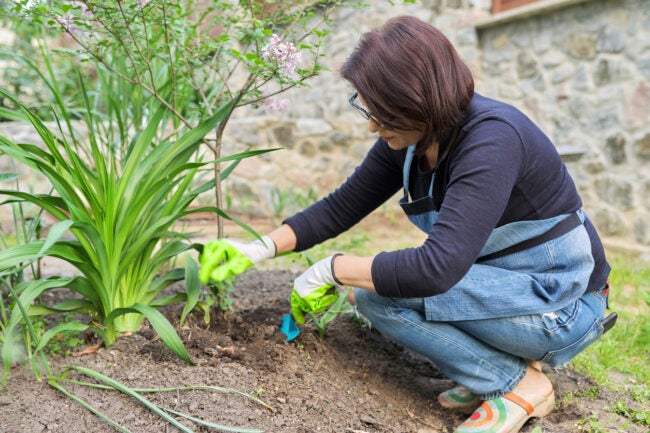 Once your lilac is a few years old or about 6 feet tall, remove another third of the old canes the following spring and repeat the process once more the following spring. Once all the oldest shoots have been cut off, you can leave the shrub to grow unchecked for about 3 years, after which you will need to repeat the rejuvenation process.

If you’re looking for information on propagating lilacs, keep in mind that the cuttings need to be in the right stage to root properly. Those that break quickly when you bend them are best suited for propagation. If the cuttings are too young and tender or too old and hard to break, they probably won’t work. Cut 3 to 5 inch cuttings with at least two leaf nodes each and follow these instructions for rooting softwood cuttings.